« Sign the petition - help greyhounds in Mexico | Main | How many readers have one of these dogs? » 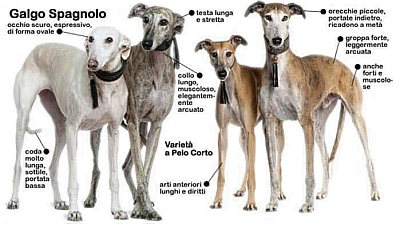 The galgo, unlike all other dog breeds, was not created and selected by man, it is a product of nature already represented in the first graffiti of upper Mesopotamia and has reached us practically intact.

The man, who transforms everything, did not feel the need to intervene on the galgo.

He was the first animal to collaborate with man, he is morbidly attached to his master, he is lazy and loves to sleep, but he is ready to transform into a very fast hunter, with an attentive eye and snappy muscles.

He is tender, affectionate, reserved, never intrusive, discreet presence by your side.

It is a majestic dog, fast as the wind and light as a feather.

One of the most revered races in antiquity, to the point of being forbidden its ownership to peasants and poor people for the exclusive use of nobles and rich people.

Today its speed is also its curse, a useful dog for racing, hunting and for all that is needed by man to make income.

It becomes an object and once broken, inevitably, it is thrown away.

Few people know what a Galgo is, the Spanish greyhound, used indiscriminately by hunters for hare hunting.

Raised massively, at the end of the season the lucky ones are abandoned, others hanged, beheaded, burned, impaled or thrown alive in wells every year throughout Spain.

We are talking about thousands of dogs, not isolated cases.

Known as "the children of the wind" for their ability to run fast on the ground (a spectacle of nature) but also as "the dogs of nothing", because they are considered objects, work tools, to be used for fun and to be thrown away when not more profitable.

Sentenced to death from their birth, they will never know the affection, the warmth of a home, the comfort of a sofa.

In Spain every year the numbers regarding abandonment and torture are scandalous.

It is for this reason that we are particularly interested in this breed, so abandoned and underestimated as to make its owners potential killers.

Discovering the greyhound as a pet is a unique experience.

Only those who have been lucky enough to participate in his daily routine can truly understand a greyhound. "

Beryl Brennan on 12 January 2023 in In the media, Regional news | Permalink