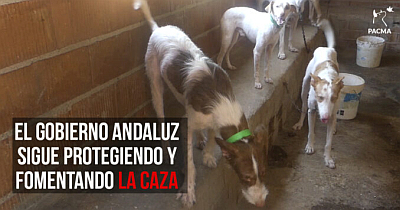 This is a weblink to introduce the new team at PACMA, leading the fight to protect Spain's abused animals.

This is a weblink to an article about the Government of Castilla-La Mancha wanting to promote the violence and cruelty of hunting among young people and women.

This is the translation of a PACMA article about dog-fighting in Spain. Galgos are sometimes bred as bait dogs to be used in this cruel and barbaric activity.

New information has just come to light about the case of dog fights that were organized in different parts of Spain and that ended with 23 arrests in 2017. Among the accused were veterinarians, breeders and even a policeman.

We have learned that 19 of the people involved have reached an agreement with the Prosecutor's Office, mitigating their sentences. They will not go to prison. Some have appealed their sentences for considering them "too exaggerated" for the seriousness that currently implies the crime of animal abuse in our country.

We are talking about a criminal organization for whose arrest a national police device was organized in which forces from Madrid, Tenerife, Alicante, Murcia and Andalusia converged. 230 dogs trained to fight were withdrawn. Dozens of them died from their poor health after their rescue, and the total deaths at the hands of these subjects and as a result of injuries are countless.

For the Penal Code, the life of an animal is worth nothing, and this situation will continue even with the reform that is proposed because the penalties do not reach the minimum years to set foot in prison. In addition, there will be more facilities to change sentences for economic fines.

Without an effective and powerful Penal Code, animal abuse will continue to be ignored. The only hope is to promote changes at the political level that sustain this already unstoppable animal rights movement. At PACMA we are working on it every day.

Are you on our team?