PACMA fighting for animal rights in Spain - blocked by the hunters! 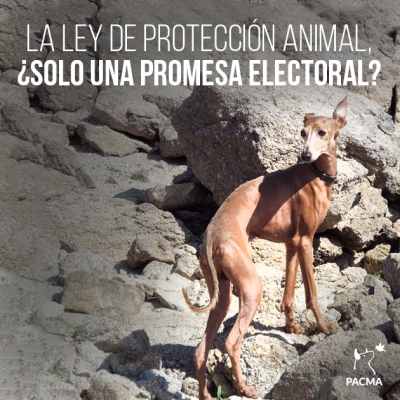 The latest news from PACMA

'In October 20231 the Ministry of Social Rights and the 2030 Agenda "presented" its preliminary draft of the Animal Protection Law at a public event. A month and a half later, the only thing that is published on its website is a draft of the preliminary project, and the hearing and public information process has not been opened.

From the beginning we warned that this law left out most of the animals: the victims of livestock, hunting, experimentation laboratories, bullfighting ... But also, at this rate, the legislature will end without the animals having a animal protection law at the state level, the false promise of Podemos at electoral time. Once again, animals are the most neglected, relegated to the background and vilified.

This week several media outlets published the news that the Ministry of Agriculture is blocking this law due to pressure from hunters. Again, the PSOE is complicit in the hunt and turns its back on the animals.

We have been warning for some time that animals do not matter to the PSOE or Podemos and that the law will remain a mere promise. It is proven: PACMA is the only party that truly defends all animals. On their table they have for years, ready for approval, the Zero Law, a law that does protect all animals.

We need your support to continue fighting for them. Thank you for being your voice!

The State Animal Protection Act, so promised at the time of election by Podemos, which was introduced two months ago without even being able to publish it as a draft law, seems to be paralyzed by the Ministry of Agriculture.

The PSOE puts hunters interests before animal protection and once again yields to the interests of those who enjoy shooting and killing on our mountains.

It's a shame ! We have been warning about our fears for a long time, that they would extend the deadlines for the end of the legislature without processing an urgent law for animals and, day by day, our suspicions are confirmed.

The Central Government, the PSOE and Podemos, continue to turn their backs on animals and shield hunting.

WHY A ZERO LAW

A hunter can shoot an abandoned dog or cat in Castilla La Mancha, although in Andalusia he would be punished. A rooster can be forced to fight for his life, against another rooster, in any corner of any Canarian municipality, but in Galicia it is prohibited. If a horse lives in Galician territory, it will not be covered by its animal protection law, while that of Catalonia protects it as a domestic animal. Bullfights are not held in Catalonia, but ...

The disparity between the regional laws for the protection of animals, the increase in complaints of animal abuse and, above all, the growing sensitivity of Spanish society towards the rest of animal species, force a project that unifies the legal regulations to protect animals and eliminate any obstacle when promoting regional and local improvements for the sake of their well-being. A Law, in short, that starts from a premise: Zero Abuse.

Beryl Brennan on 27 November 2021 in Campaign, In the media, Regional news | Permalink