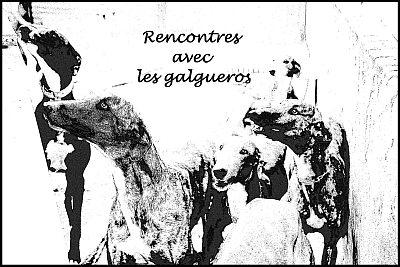 I've copied this story from the facebook page of GalgoPod Andco, report of a meeting with galgueros in 2016. Sadly, for all the efforts of all the rescue associations and fosterers and adoptants, the situation has not changed. Except I would say there are not so many reports of galgos being hung...the galgueros are very well aware of the bad publicity it gives them!

A tall and strong man, rustic, he could almost seem friendly to us if we didn't know he's a galguero. We meet him in town to meet his galgo, the one he wants to ′′ offer a nice retirement ′′ because he's ′′ the best hunter he's ever had ", a kind of reward for hunting years and the prestige that he made his master rejoice. Isn't having the best dog a hunter's dream...
The man knows perfectly how we treat our galgos in France, this dog's mother was adopted a few years ago and he's seen pictures, he wants this life for his dog, but can't afford it... Marie Angelique shows a photo of his galgas comfortably installed on the corner sofa, he's not surprised, that's what he wants for his dog.

The man is proud of his galgo, scrolling it in front of us, like on display, and the dog lends itself perfectly. He detaches him, we're downtown, the dog doesn't move, he listens to his finger and eye and looks at his galguero with the eyes of love. But that look is also borrowed from fear. There is an undeniable complicity between the two, showing the dog's unfailing loyalty to his owner, whatever the conditions.

The conversation is committing very quickly, with the clear impression that this man wants to redo his Galguero coat, can prove to us that there isn't just garbage in this environment, or that he's not one of those. There is a shade here.

Her dogs are treated well, they are regularly monitored by the vet, vaccinated, deparasitized, flea and tick treated, treated in case of injury or illness, the vet assistant is here to confirm. The role of the ASV is important, along with the vet, they direct galgueros whose dogs are no longer of age or in a state of hunting towards the volunteer, who then performs a huge job. Everything should be explained to the galgueros and especially that from the moment the dogs are spayed and vaccinated they should no longer be used for hunting, in other words, they should feed them free without asking them anything in return, waiting for them to come They are adopted. The message is not easy to spread, we all know dogs that no longer serve are a pointless burden.

Galguero answers all our questions, without false modesty, he is a proud man, proud of his person and without complexity, proud of his galgo, proud of his way of treating his dogs, he thinks he's a ' good galguero '!!! We argue with him without judgement and he feels it, a semblance of confidence settles in and he then proposes to see his other galgos. We accept without hesitation.

A long dirt road in the countryside, isolated farm, large enclosure with dozen mastins, used to keep cows during the day and property at night, horses, hens, farming equipment... the scenery is planted. Here we are in the secret universe of galguero. We seek eye galgos, in vain. Where the hell are they? The man then opens a small door we didn't even notice, there they are, seven beautiful young galgas between 8 and 18 months, all girls of the galgo great hunter who is the eighth of the pack, real ones wonders of beauty.

The questions are flushing, we learn that females are better hunters than males, take their first steps on hunting around the age of eight to nine months and some are already very promising. What will he do with those who don't have the requisite qualities? We don't know, but we're setting milestones to recover them immediately. The galgo surrounded by his daughters, nice family painting. And the mother, where is she? He gave it to another galguero, so she could make him puppies... next we know her... no golden retirement for this bitch, she will serve again and again, go from galgueros to galgueros, suffer forced projections (rape), carried on litters, she will suffer from being removed from her puppies too soon, she will suffer from being constantly locked in a cage, too small to be able to get up or even turn around, sometimes even without seeing the day , she who once ran into the country... we may find her for adoption one day, when she's completely worn out, exhausted, and she's definitely unusable, maybe we can then avoid her from dying at the end or alone in his corner, after a long agony... I stop there, tears rise, nausea takes me, I think too much of my dogs Bianca and Smila who lived this life as martyrs, as well as Coco, one of the dogs of Marie-Angelique.

A few more answers to our questions: the yellow color you can see on the paws of some hunting galgos comes from a liquid solution used to harden their pads. The galguero explains the need to soak the paws very quickly or burn them because it is an acid solution. The front paws are cut off to prevent them from hanging on or getting injured with stones while running. Dogs are trained daily, they run 25 kilometers on country roads, Galguero accompanies them on a bicycle, insists that motor vehicles are now strictly prohibited for dog training and comply with the law ... he makes me palpate the thigh of one of the galgas, an impressive musculature.

We regretfully leave these wonderful dogs, hoping to collect them when they no longer hunt, and especially before they turn into ′′ puppy machines ", or maybe sooner, if one of them shows themselves unwilling hunting. We explain to Galguero the work of our association in collaboration with Spanish volunteers and leave him our card. We are here to take the issue at the source and we expect much from this meeting.

The heavy door closes, secured by a lock and lined by a categorized dog attached to a chain. Can't get close, Galgos are being held in secret places and carefully protected from many flights. If the galgueros don't steal each other, the gypsies are on the lookout. In summer there's a man sleeping on site, but in winter dogs sleep in a bunker closed by a huge armored door that Galguero shows us too. It ends with feeding dogs, meat from butchery, and with material, leashes, muzzles... etc.
Time to go, another galguero is waiting for us...

This second meeting is fundamentally different. This is the volunteer's first contact with this hunter, so we choose to stay away in order to avoid a force relationship that could make him uncomfortable and fail the negotiation, the term is not too much, It's one. Three against the hunter is enough, by the way his wife will come to join him quickly, an attitude probably dictated by his unconscious wife of Galguero, admiring and supportive of his hunter's husband. (lol)
This one is much younger and, even remotely, seems immediately unpleasant. The bitch that is by her side is called Yoli, she is terrorized, her look hurts. If Galguero accepts her care, she should be spayed and vaccinated but she should not hunt until adoption. Will he accept the terms? Gonna have to act fast, doesn't seem patient.

Man talks about another bitch, injured, a hole in the paw, but he doesn't fix her. He adds that as long as she walks she doesn't need care. ′′ It's okay like this..." It's clear that it's a tool dog. We don't know anything about her, except that he still wants a litter before letting go, because she's an excellent hunter... the volunteer will insist on picking up the second galga, but it's not won.

These two dogs are extreme emergencies, we're going to do everything we can to take care of them, we're waiting to know how things are evolving on site and we'll need godmothers to get them safe asap pension, if we're not fast enough, these dogs are at risk of taking a shotgun, at best!

Does he need a conclusion?

Being able to enter the secret world of galgueros is an opportunity, knowing your enemy to fight him better... However we condemn and will always condemn these practices of another age. Spain and Portugal are the last two countries where greyhound hunt is still allowed while it is banned in France since 1844. Galgueros are fiercely attached to this ancestral tradition and they feel the pressure rising, with the possibility that one day galgo hunt can be banned in their country, so it's no surprise to see them display themselves as ′′ good galgueros "... The various actions and demonstrations in Spain, France, Germany are starting to wear their fruits, we must continue the fight more than ever.

As a safety measure, no names and pictures of dogs, men or places are revealed.

Beryl Brennan on 04 May 2021 in Campaign, In the media, Regional news | Permalink