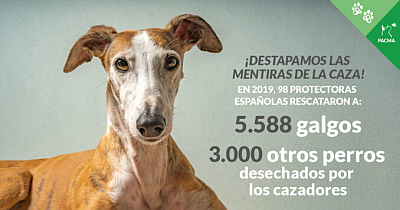 'We have been listening for many years to hunters, public administrations and politicians of all kinds deny the reality about the abandonment, mistreatment and death of thousands of dogs used to hunt.

Murcia is one of the territories that suffers the most from this scourge. The hunters roam freely and their bloody entertainment fills the shelters and shelters of abandoned, discarded and thrown dogs. In a report that we publish today together with dozens of associations from all over Spain, a tremendous data is collected: a single protector from Murcia rescued 259 greyhounds and 43 other dogs discarded by hunters during 2019.

How many dogs do hunters abandon each year in Spain? How can SEPRONA affirm, as it did in 2019, that there were EIGHT greyhounds abandoned by hunters that year? How can the years continue to pass without any political party in government having done absolutely nothing?

In the report that we publish today, together with 98 protectors from all over Spain, we collect the real and indisputable figures on the abandonment of greyhounds and other hunting dogs. Only the protectors that have participated in this report, and that are a symbolic sample of the thousands that exist in Spain, rescued 5,588 greyhounds and another 3,000 hunting dogs in 2019.

To these terrible figures should be added the data of dogs used to hunt that rescue thousands of other associations throughout Spain, those that are directly killed by hunters (hanged, drowned, executed, abandoned and killed on the roads ...); the thousands collected by municipal kennels and those rescued by private individuals. The actual number of hunting dogs discarded by hunters is likely to be in the tens of thousands of dogs.

It is a shame that no public administration has ever shown any interest in shedding light on this very dark reality that no political party is willing to confront.

Today we have delivered this report to SEPRONA and we have requested to collaborate in the fair collection of data on the abandonment, mistreatment and death of greyhounds and other hunting dogs. A reality that is denied cannot be faced.

We work tirelessly to end hunting, to outlaw an activity that sows panic, violence and death in our mountains.

At PACMA we are clear: hunting must be a crime. And we know that society supports us.

Without rest, for the animal.'

Weblink to English translation where you can join PACMA and get up to date news of their efforts to help the animals of Spain.

Beryl Brennan on 06 March 2021 in Campaign, In the media, Regional news | Permalink