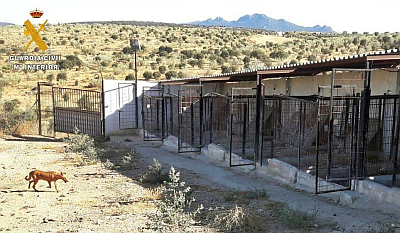 'This would quickly end with good control by rural and police officers and exemplary prison sentences.
But in this country we go back like crabs and abuse and murder comes out very cheap. This rabble are murderers!'

18 months' prison sentence...a farce...the judge was probably a hunter too!

Badajoz, Extramadura, is especially a hellhole for hunting dogs!

Read the story on this link.

The Seprona of the Hornachos Civil Guard has instructed criminal proceedings against the owner and the keeper of a large game area in Puebla de la Reina as alleged perpetrators of a crime of animal abandonment resulting in a score of deaths.

As a result of the information obtained by the death of 25 dogs in the Badajoz municipality of Puebla de la Reina, Seprona launched an investigation aimed at verifying the facts.

With the steps taken, it was possible to locate the place where the animals died, a farm in the aforementioned municipality that housed a kennel for the royal stay.

In the expert inspection of the place and development of the investigation, the agents obtained enough evidence to incriminate the owner and a caretaker of the dead dogs, who supposedly, from last May to July of this year, stopped attending to the animals , omitting the due attention and care of them, malnutrition and the "absolute lack of health and hygiene" that supposedly caused the death of the dogs.

The corpses of the animals were collected and removed by a service company for the removal of dead animals, as reported by the Civil Guard in a press release.

With all the incriminating evidence, criminal proceedings were instructed to the owner and breeder of the dogs for a crime of animal abandonment resulting in death, contemplated in article 337 of the current Penal Code.

Those now investigated will face prison terms of up to eighteen months and special disqualification of up to four years for the professional exercise, trade or trade related to animals and their possession.

Crime of animal abandonment
The crime of abandonment can be committed whether the animal is left abandoned outside its residence, in the countryside, on the outskirts of the city, or on roads "always in danger", as the person who omits due attention and care of these, nutrition and lack of health and hygiene, with the consequent danger to their lives.

The proceedings filed were sent to the Villafranca de los Barros Investigating Court.

Beryl Brennan on 21 August 2020 in In the media, Regional news | Permalink

One almost gives up hope - but we can't. Just got to keep on campaigning.