Galgos happy in their US forever home 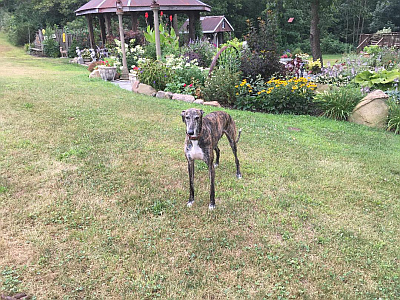 Beth Travis has written the story of how she came to be involved with galgos and the ones she adopted.

'The pics I have attached Pablo (tri-colored) and Cisco (white) and Drogo (brindle).

I have always had 2 dogs so that when I am at work they can keep each other company. When my one dog passed away of old age I was looking for a companion for my other dog. I don’t have children so my dogs have always been the focus of my life to love and spoil. I was talking about it at work when a co-worker said I have a Galgo from Spain and I am fostering a Galgo Whippet mix. My response was “what the heck is a Galgo”. Most people in the US have never heard of a Galgo and as soon as I saw his picture I fell in love with him. I called him Pablo and was told the family that first adopted him returned him because he hid in the closet. My co-worker was trying to get him socialized so he could be adopted to his forever home. He came from out of state from a woman who brought a couple galgos from Spain and was cross breeding them with other breeds of dogs. But it seemed to be more of a puppy mill where they were just kept in cages and not socialized.

A veterinarian who specializes in hounds had rescued dogs that this woman no longer wanted and gave them medical treatment and put them up for adoption. This vet also makes several trips to Spain to bring back galgos to find their forever homes. Pablo was 1 year old when I got him and very shy. But my Shepherd showed him how to act and how to play. For years they ran and played in the sprinkler together then they would lay and sleep wrapped up in their beach towels. When my Shepherd passed away, Pablo would never go in the sprinkler and had no interest in water ever again.

The veterinarian had brought a whole van full of dogs back from the same place that Pablo came from. I adopted another Galgo Whippet mix that I named Cisco. This poor dog had no socialization for over a year and it took him a very long time to not be afraid of people. The harm that people do to these sweet dogs by not giving them the proper treatment has such a longtime effect on them. Cisco is now going on 12 and he has had some health issues over the years. Pablo had Addison’s Disease and for quite a few years I had to take him every 25 days for injections, but he lead a happy life and did well up until the end. I always wondered if their health issues were due to their poor living conditions for the 1st year of their life. 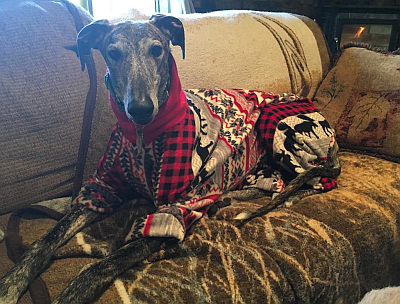 I let the vet know that Pablo had passed away. She said she had just brought to the US some galgos from Spain and she sent me some pictures. I really liked a gray brindle that she had and I went to look at him. When I went in the room to see him there were two other galgos with him. This one dark brindle Galgo would not leave me alone and he just wanted so much attention. Every time I was trying to look at the Galgo I originally came there to see, he would push right in front of him for me to give him attention. So I say, he adopted me and I took home the dark brindle galgo I named Drogo.

With Drogo’s gentle personality I decided to have him become a therapy dog. I wish I could take credit for how well Drogo acts but It is just who he is. We volunteer at a couple local hospitals and he is like a rock star. Everyone loves him and he always gets requests for return visits. Drogo also does a reading program for children that encourages children by having them read to the dogs. He gets along with Cisco and all other dogs and he loves stuffed animals. He doesn’t like to go outside without one of his stuffed animals in his mouth. Drogo originally came from Galgo Sin Fronteras in Spain. 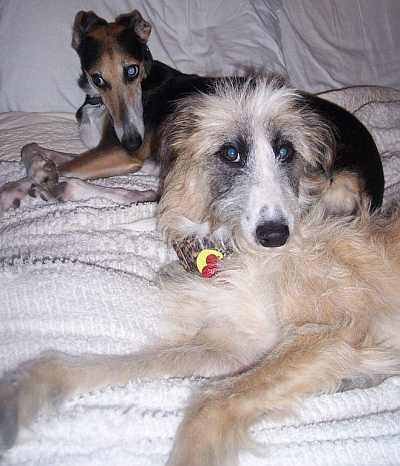 I wish I could personally thank all the people who spend so much of their own time and money by helping these dogs have a better life to people who value and love them. Drogo is the biggest baby wanting to be loved on all the time. He is very smart and he does silly things that make me laugh every day. I wish the use of these dogs in Spain would change and I am hoping films like Yo Galgo will educate people to what is happening to put pressure on Spain to end it. Drogo has a huge scar across the top of his head that always makes me wonder what happened to him or who may have deliberately caused it. Then I look at him and think how forgiving he must be to still want to be around human beings after someone caused him so much pain.