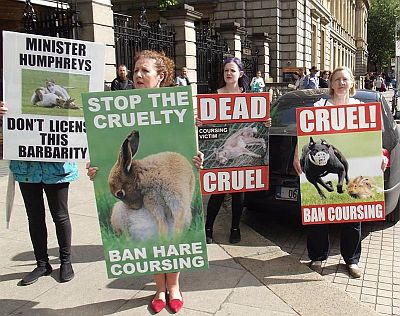 Where I used to live in Suffolk, England, we had cars arrive at a field in September after the crops had been harvested. The men had greyhounds with them, plus cages with trapped hares. We used to call the police but by the time they arrived, the men and dogs had scarpered. My first greyhound turned up at our home as a stray and from her condition I reckon she was one that got left behind because she was not fast enough. She lived happily with my other dogs and cats too. So although this campaign isn't about galgos, hare coursing does happen in Spain just the same, it's what the galgueros do. Please write and join the campaign.

Let's ask politicians to back protection of Ireland's persecuted hares!

The Campaign for the Abolition of Cruel Sports (CACS) welcomes the new Bill to ban live hare coursing in Ireland, drafted by Paul Murphy TD, that will be debated in Ireland's parliament later this year. Campaigners for animal protection are putting this Coronavirus lockdown time to good use and are already lobbying our politicians to support the Bill! Contact details below.

The cruel “sport” of hare coursing continues in Ireland against the wishes of a big majority of the population. A recent Red C poll indicated that 77% of Irish people would support a ban on the practice.

Thousands of hares are captured in the countryside each autumn and used as live bait for pairs of greyhounds. Bets are placed on the competing dogs, with no concern for the unfortunate hares that are mauled, forcibly struck, and tossed about like paper toys, their screams piercing the winter air. A hare's cry of distress has been likened to that of a baby sobbing. But to the fans who care only about prize money or the "thrill of the chase" its sad fate means nothing.

Apart from the cruelty of coursing, the very survival of the Irish Hare as a species is threatened by the RHD2 Virus that is fatal to hares and highly contagious. The use of nets by coursing clubs to capture hares has been identified as a significant factor in the spread of the disease.

The Irish Hare is one of our prized biodiversity assets and an iconic creature celebrated in our culture. Its loss would an ecological catastrophe.

We are appealing to all TDs (members of Ireland's parliament) to back Deputy Paul Murphy’s Bill and give it long overdue protection from one of the worst forms of organized animal cruelty ever devised by man. We are also calling on the Green Party will make a hare coursing ban one of the conditions for its support for Fianna Fail and Fine Gael in government.

Here is Paul Murphy speaking about his new Bill to ban hare coursing:

Beryl Brennan on 24 April 2020 in Campaign, In the media, Regional news | Permalink