« Beware of the tiger mosquito - causes filaria (heartworm) - has your Spanish hound been checked? | Main | Save the Greyhounds and Galgos of Portugal »

PACMA protest outside the Spanish Government, for inaction on animal welfare 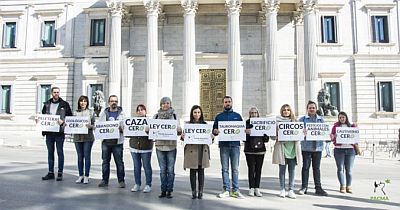 This is a google translation of this article into English

Who do they fear? Who do they protect? Why haven't they taken it forward?

Last week we have returned to Congress to remind the PSOE and We can that animals are still waiting, they need a law to protect them. But not just any law.

They need the Zero Law, which requires only political will, courage and conviction, because the work has already been done.

Animals have us on their side, without hesitation or hesitation. Today we have gone to Congress to demand the processing of this law, and we will not abandon our efforts to legally recognize the dignity and protection that animals deserve and need.

For them, we continue!

Currently, animal protection competencies are transferred to the autonomous communities , which causes incomprehensible situations of incoherence and imbalance. A hunter can shoot an abandoned dog in Castilla-La Mancha, but would be sanctioned in Andalusia. A rooster may be forced to fight in the Canary Islands, but not in Galicia. This lack of legislative homogeneity is an injustice and a great danger to millions of animals in our country.

Spanish society is increasingly sensitized to the treatment that animals receive, reports of animal abuse increase every day and the outrage of citizenship grows with every public display of violence towards an animal. That is why in PACMA we consider it essential a law of state application that protects all animals, regardless of the autonomous community in which they are located.

Our Zero Law is really ambitious and covers the protection of all animals , but it has three main nuclei:

Bullfighting Zero : ending bullfighting is a pending historical claim. Bullfighting has no place in Spanish society. A small percentage of the citizens go to bullfighting shows and the majority of the population openly declares themselves against this torture. From PACMA we propose with this law the prohibition of all bullfighting modalities.

Zero sacrifice : most kennels are saturated. They house a number of animals much higher than they can manage, so they keep them crammed and in poor condition. The execution of dogs and cats to relieve space is frequent and legal. Kennels have become death corridors for animals. The protectors have become their salvation table. Associations (with their own shelter or a network of foster homes) that rescue animals from the kennels and the street, and that are looking for a family. In PACMA we propose to tackle the problem from the beginning. The Zero Law contemplates the prohibition of the purchase and sale of animals, compulsory sterilization and the promotion of adoption. Only then will we achieve Zero Sacrifice.

Zero Hunting : every year hunters execute millions of animals in Spain. In addition, hundreds of thousands of dogs used as hunting tools are abandoned or killed at the end of the hunting season. The hunters force the dogs to breed again and again to the maximum physical and psychological wear, discarding the puppies that are not useful, killing or abandoning them. Hunting is a violent practice that pursues and executes animals, pollutes nature and appropriates natural spaces, preventing citizens from enjoying them. Only by prohibiting hunting activity can we guarantee the welfare of wild animals and the environment.

The Zero Law proposes solutions for all manifestations of animal abuse that are shamefully present in our country, from fur farms to hunting animals, through the control of populations with lethal methods and the possession of exotic animals. It is a law that guarantees the minimum animal welfare criteria for all animals, not only those considered company. Similarly, it also establishes prevention mechanisms and defends the promotion of education from the point of view of respect for animals and empathy.

From PACMA we offer this proposed law to the Government of Spain for processing and implementation. There are no more excuses that justify dilating it over time.

Beryl Brennan on 02 March 2020 in Campaign, In the media, Regional news | Permalink