Galgo Panteon - rescued from a grave and waiting forever 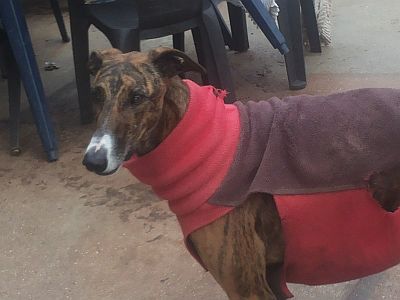 From Cobie at Protectora Scooby Valladollid.

'So many people want to adopt Princessa, the galga that probably was shot through her head and that is good because this girl needs the best family there is after her ordeal and live the rest of her life in luxury as she deserves.

But there are so many dogs who deserve this, and one of them is Panteon. He was not shot in his head but fell, when abandoned and looking desperate on a graveyard for something to eat, in a new dug grave from 2 meters deep from which it was impossible for him to get out! Luckily somebody found him and warned Scooby so we could take him out and bring him to safety and this timid boy is now, over half a year later, still not adopted...He needs a bit time to know you but than he is the sweetest and most thankful boy you can imagine. He so needs his own, loving family which he can trust to be happy and also live the life he deserves...!'

Contact Scooby direct if you can offer him the loving forever home he deserves.

Beryl Brennan on 11 February 2020 in Adopt, In the media, Regional news | Permalink

This is only a preview. Your comment has not yet been posted.

The letters and numbers you entered did not match the image. Please try again.

As a final step before posting your comment, enter the letters and numbers you see in the image below. This prevents automated programs from posting comments.

Having trouble reading this image? View an alternate.

Comments are moderated, and will not appear until the author has approved them.

(Name and email address are required. Email address will not be displayed with the comment.)