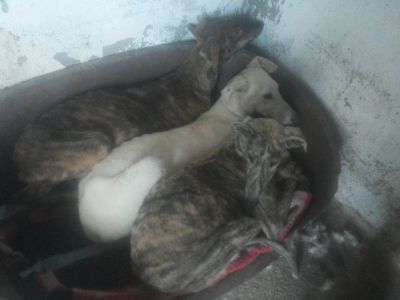 From Cobie at Protectora Scooby.

22/11/2019 - 2 Hours ago, 3 galgopups from some 4 months young were thrown over the wall from the big playfield at the Scooby residencia. They are of course terrified, it´s very dark there and impossible to catch them now so they will have to spend the dark and cold night outside. They have access to an empty kennel where I´ve put water, food and blankets and can only hope they will find it...It is too dark to make pictures of them but tomorrow I will if they are still there which of course I hope with all my heart because normally the dogs can´t escape from there. I´ve called the police and they will come here tomorrow so at least they know that these things are happening here! I hate these galgueros who do this so much, I´m ready to kill a few of them!!

The pups are all fine!! This morning they were all 3 dry, warm and together in the kennel I left open for them! They are 3 males and still very impressed by their adventure from yesterday but they let themselves touch without problems and I´m sure that within a few days they will be playing around as if nothing happened.

Bad thing is that this morning another pup was in the street here right in front of the residencia but there was no way to catch it, he fled to the mountains and I have not seen him anymore...poor thing. I have spoken to the police but they can´t do anything because we don´t know who threw them over the wall and their only advice is to put up some security cameras because when they can throw them in, they also can take others out and that is a nightmare I can´t think about.

But with cameras we could identify them! So after having spoken to Fermin we have decided to try to raise money for 2 cameras for the residencia and also 2 for Scooby Medina because we want our dogs to be at least safe once they´re in the shelter. So please help us to raise the money for security cameras. SPA Scooby, Medina del Campo.

(I have asked Cobie what the cost of the cameras is)