Cuidad Real is about 200 kms south of Madrid and the Protectora of La Bienvenida is the shelter from which I adopted my first galga Karmel. The region is a hellhole for galgos, abandoned in their hundreds and the shelters struggle to cope.

Cuidad Animal Refugio has dozens for adoption, here is a weblink to them.

Refugio Kimba in Cadiz - the oldest Animal Protective in Spain 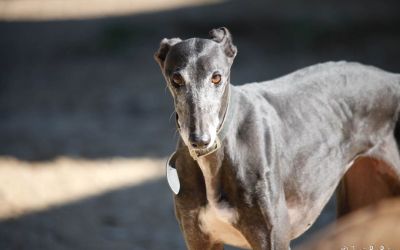 (Lola) The Protective Society of Animals and Plants of Cádiz, better known as "Kimba Shelter", was founded in 1872 and is therefore the oldest Animal Protective in Spain.

Although in its origins the protection of the plants was mainly its exclusive purpose, finally and in 1966 the refuge was created that would house the abandoned animals.

Since then the work that has been developing this Protective, includes different paths but always aimed at the same purpose ... the defense and protection of animals.

Below are a few of the galgos waiting and hoping for forever homes. Contact Refugio Kimba.

Happy hounds at Hope for Podencos

Rescue shelters are always grateful for volunteers taking time out from work the spend their holidays helping hounds. Hope for Podencos is no exception, with 80 dogs to care for, many rescued from Gran Canaria. Here's a lovely video taken by one of 3 volunteers who recently spent a week with the hounds. Mostly they are Podenco Canarios but there are a few galgos in the mix too! 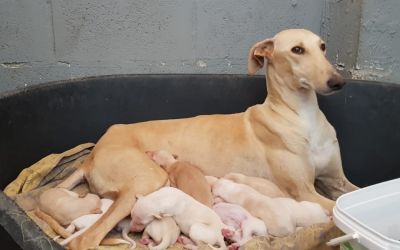 'It would be difficult to explain to Venus, as well as to so many thousands of abandoned galgos for not already offering her galguero-hunter the benefits he needs, that she with clear symptoms of malnutrition and dehydrated, has to give birth to her cubs in that horrible place of where we rescued them because whoever accompanied and served faithfully is no longer useful, and as if it were an unusable tool, he directly abandoned it.

Spain is the only country in Europe that allows hunting with galgos, and as such and according to data from the Spanish Greyhound Federation 200,000 greyhounds are used annually, of which according to statistics collected between law enforcement, collection services animals and protectors, 50,000 plus those not counted in any way are abandoned.'

This link takes you to the figures I presented to the PAES International Conference on Animal Welfare in 2015 - nothing has changed since then. The galgueros continue to breed and abandon their hounds without care. This still goes on in Spain...
A few days ago found near Sevilla...hanged...
And there are people who continue to deny the obvious, that the galgo is the most abused breed...

This is how this galgo has been found.
The Galgueros will say that it is not of them, which are from other galgueros of other peoples.

Scooby to the rescue again - pup dumped in Valladolid perrera! Cobie writes '10 Months old and already left behind in the perrera municipal from Valladolid. She felt very lost when she first arrived here after Scooby had taken her out of there but now she is adapting well to her new friends and her kennel. Especially after we told her that she is definitively the galga with the biggest ears we have ever seen! Her name is NOT Orejas (ears in Spanish) but Tuna. So beautiful...'

Black is beautiful, especially with a colourful collar. Their coats gleam and shine once they have been rescued and recovered.

Has your galgo/greyhound got corns?

Is there a genetic link in galgos/greyhounds suffering from paw corns? The Greyhound Initiative at Ohio State University is this month (August) conducting research into this and requires volunteers. To learn more, click on this link. 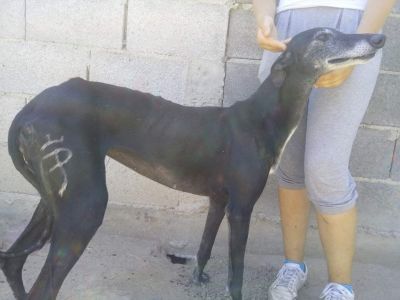 Again, some galgueros show the world how cruel, inhuman and insensitive they can become and how much they don't care about the well-being of their dogs.

We are sickened in our hearts just thinking about the anguish, pain and suffering that this galgo has had to endure, poor creature.

Scooby team to the rescue again

From Cobie at Scooby Residencia Valladolid.'A long awaited rescue!
And that is that this galguita has been abandoned for six months (with the suffering and the dangers that it entailed for her) in Medina del Campo.

But on 7th August, finally, after many days of trying, our colleagues achieved to catch her. An enormous happiness invaded all the people of Scooby (who had been doing the routine and the follow-up for months) when they saw that the little one entered in trap cage and the door closed behind her. Now thanks to the great Scooby team this beautiful and sweet girl is already safe.

We have fallen in love with her as soon as we saw her, and you? We are sure that too.

In order to continue saving lives, we need your help and you can do it with just € 1 a month by joining our teaming group: http://bit.ly/2teaming

Story from Cobie at Scooby. Another terrible case of animal abuse! 16 hunting dogs have died of hunger and thirst in Tudela (Navarra).

Incredible that these things keep going on in Spain...

I have asked if there is going to be a court case as the story has been removed from the newspaper page.