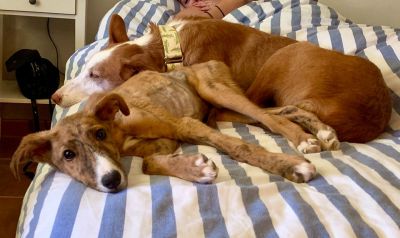 Latest news from Bev Farmer on podenca Carley and galgo pup PJ who were rescued together.

'Today we got the final results for Carley and PJ and its been a lot to process.

First Carley...the tumours removed in her recent surgery are malignant and a high grade. She needs to go back for a second surgery to remove the rest of the mammary tract and hopefully sufficient tissue to get clear margins. She had bounced back so well from her previous surgery and now she needs to go through another one. At the moment we don't know if she will need further treatment i.e chemo, we will need to send tissue samples to the lab for analysis.

PJ... his case was referred to a second specialist for a second opinion.. bottom line, there is little that can be done for him. If the bile duct never formed and they opened him up .. game over and if it's a blockage they feel it is very unlikely that it would be a successful outcome. To put him through such a big surgery, there is a high chance he would survive. They are willing to try but they have been honest, the chances of a good result are very slight.

I got this information 18th June and broke down, held on to PJ and told him sorry we couldn't save him and with all the love for him from around the world he wouldn't get his miracle. I had long chat with my vets; for now PJ is enjoying life, he is eating well, spending time out in the paddocks pottering around, just been PJ. We will get the fluid drained from his abdomen and I sure that will make him feel better. Vet Bruno told me I don,t need to make an immediate decision, his condition is as bad as it gets. But my heart tells me not to operate and let him enjoy the time he has left, which could be a couple of months. He will be loved and cared for and I would never hold onto him to the point he is suffering.

Life is cruel. Carley & PJ are the most special of souls and I take comfort they were discovered and not left to survive alone in the countryside. That would have been a tragedy to die alone hidden away. I promise to take good care of both of them, lots of kisses and cuddles and be there for PJ when it's time to say goodbye.

To say I am devastated is an understatement. My failing is I always get emotionally invested in the dogs, they are never rescues to me. They are always part of the family that are in my care until such time comes when they are adopted .

I know many people have fallen for PJ and everyone has been rooting for him I wish it was better news.

Beryl Brennan on 20 June 2019 in Fund raising, In the media, Regional news | Permalink

From Gloria. I am so sorry his time was so short. I shed tears too at this news. You surrounded him with so much love. Thank goodness he had you for even a short time to give him love, freedom & happy times. Sending love & hugs.