As an eighteen-year-old in the 1980s, Phoenix, Arizona, I remembered hearing stories of dead greyhounds being found in the desert with bullets through their skulls. This was horrifying. Back then I made a commitment to adopt a greyhound one day. That day came many years later but I did it and Henry brightened up my life. He was an eighty-five-pound brindle and white furred creature. His skull was misshapen and this caused his eyes to be pulled back a bit as if he has "had work done!" He was adorable.

I adopted Del Sol Henry in 2018. His adoption catapulted me into this amazing and unique greyhound cult that I never knew existed! Henry and I attended nail trimming parties, and give your dog a bath events! There are dress your dogs like a pirate parties and dog park socials! There were beautiful collars for sale and matching leashes, t-shirts, necklaces, calendars!! I loved being a part of the greyhound community.

There was a pivotal event two months after I had Henry. He usually sleeps all day as most greyhounds do, but today he was restless. He stared at me and his doe eyes were even larger than usual. Then he gagged and yellow froth covered the floor. I took him to the vet immediately. They announced gastric torsion and tossed a paper at me then yelled, DNR or CPR! I checked CPR.

I couldn't imagine losing my new buddy. He was so smart! We attended Pet Smart classes together and had bonded in those two months. He knew how to stand (haha, just a joke since all greys stand!), he comes to me when I call his name, he knew how to shake, turn in a circle, jump, ring a bell and give me a kiss. He was so precious to me. I asked them to save his life. Eleven thousand dollars later they invited me into the back room to see him. I was told that they saved all of his organs because he received treatment so quickly. Sometimes the spleen or part of the stomach has to be removed due to necrosis but all of his organs became pink when they untwisted his stomach. He was hooked up to a heart monitor because he was having premature ventricular contractions. He was also not clotting quickly which is common for greyhounds. He was dopey from the morphine he was receiving and never lifted his head to look at me. I was heartbroken, but I knew in my gut that he would recover.

Today, Henry is a healthy, happy, playful boy! He is still the love of my life and he is so worth every dollar that I borrowed or that was donated to save his life. It took me a year to pay off that bill but I wouldn't have changed a thing. 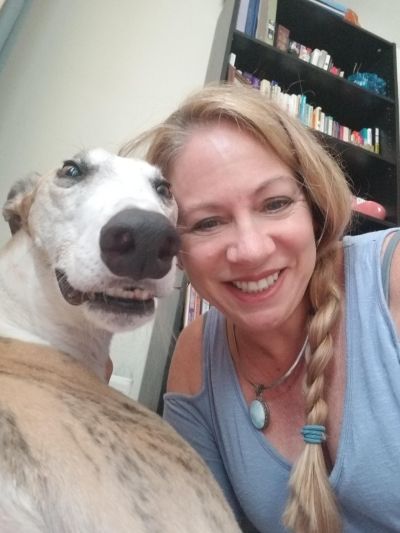 So glad Henry is happy and well with his lovely mama.