Facts and Fiction about Greyhounds and Galgos 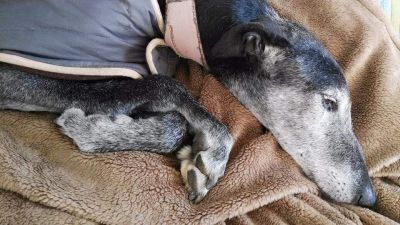 GREYHOUNDS EXISTED BEFORE THE GALGOS

Actually its the other way around. Galgos were before greyhounds. Phoenicians brought them from Egypt to the Mediterranean coast. From there they came to northern Spain where Celtic tribes took them up north to the UK.

GREYHOUNDS WERE MENTIONED IN THE BIBLE

That is most possible not the case and if , it was a middle eastern sighthound and not a greyhound. Here a very good explanation...
https://christiananswers.net/dictionary/greyhound.html…

That's a very antique translation error. Galgo was before translated to greyhound and today we know they are not the same. Galgo translated correctly should be spanish sighthound breed.

GALGOS HAVE A SHY PERSONALITY

No, they are funny playful and loving hounds that greet everybody they meet.

Wrong. To keep them mentally and phisically healthy, they need exercise as any other dog or human would need. Galgos adore long hikes and running with other hounds, can play for hours in the yard and enjoy exercise a lot. Galgos are not couch potatoes.

ALL GALGOS WERE MISTREATED OR HANGED

That is luckily not true but there is lots of mistreatment, neglect and abandoning going on. Many galgueros would have never hanged their hounds. But Galgueros don't carry rifles, the dog catches the hare, so It is possible that many years ago they killed their dogs hanging them for not having a fire arm, others because of being cruel and some for making them suffer for not running/hunting as expected. Today, thank god, is rare and punished by law.

HANGING GALGOS IS A TRADITION

No, it was never a real tradition or historically based, nor accepted by the society as for example are bull fights. It was always considered a terrible cruelty by most of the population and today a hanged galgo makes it to the national news and creats a public outcry.

False and very unfair to say because there are over 40 galgo charities in Spain, 90% run very successfully by spaniards and with all spanish volunteers.

Also not true. During the last 20 years, thousands of galgos were adopted in Spain by spanish animal lovers and in any spanish city you will see people proudly walking their rescued galgos.

THERE ARE NO ANIMAL WELFARE LAWS IN SPAIN

Spain's animal welfare fighters achieved quiet a bit in the las 20 years. Today we can report any animal cruelty and its taken seriously since the 2015 law change. Now people can go to jail for severe animal cruelty and Spain has its own police for nature, environment and animals, called SEPRONA. It's a far from being perfect for the animals in Spain but compared to 20 years ago our continuous fight for animal justice made a big progress and people report abandonment and cruelty. Unfortunately most of the cases never reach the authorities as most cases never go further than a facebook post. This has to change,because when every case gets reported, the authorities will not be able to ignore the problem anymore.