The galgueros continue to claim they don't hang dogs. This is in Rociana recently!

'Although we always see these scenes on Facebook and in the news, we never hope to find it. This is the reality for the galgos.

This is what I had to find in the field when I went out with my dogs for a walk. A very young galga which has been hung and thrown there in the middle of the field, nor have they even had the delicacy of having buried her after her horrendous death. I only wish you galguero.... son of the great whore - that you have the same death that she has had, slow and painful. You stayed next to her while she was hanging and fighting for her life, and when she ran out of strength and without oxygen you cut the rope to throw her there in the middle of the field. What kind of person is able to do that....

Hopefully we'll find out who did this, we won't stop investigating. Please... If anyone knows to whom this galguit belonged or has any clue of who did this, contact us in a totally anonymous way. We will never reveal the name of those who give us clues or data that make us reach who did this. She had no chip.

Beryl Brennan on 28 November 2018 in Campaign, In the media, Regional news | Permalink | Comments (0)

Please don't be alarmed at the photos of Remus. This is the first photo of him coming out of the perrera weighing 18kg. The second and 3rd photos were taken today weighing 17kg.(see below)

During the first week he actually went up to 22kg, but I think that this was mainly water replacement because he was so dehydrated, having fed him top quality wet food. Then the distemper really kicked in, he went down to 20kg, then 18 and then 16. If you think he looks bad now I'm sure you wouldn't have liked to see him when he was 16kg, that's why I photo'd him with his jacket on, and also to keep him warm.

From the looks of these galgos lying panting, I would guess the bastard galguero has just run the 6 of them on lead alongside his van with his arm through the window. Here's the message from the Protectora of Baeza.

A galguero doesn't want these 6 Greyhounds, 3 of them are puppies of 6 months, 3 adults. He may give them to another galguero but we need to rescue them. 2 are going to another association, that leaves 4 we need find places for them. We don't have room.

Please share for all places to see if we can find a solution or they will surely have a bad end. If anyone can foster please,

Beryl Brennan on 26 November 2018 in Campaign, In the media, Regional news | Permalink | Comments (0)

I hope regular readers will have chuckled at the Richard Skipworth greyhound glossary cartoons I occasionally publish. Well, now he's produced a book of two years' worth of his cartoons, together with 4 Christmas Card designs and a 2019 calendar. All sold to raise funds for the Greyhound Trust. Info below.

'I've just done a deal with the Greyhound Trust in the UK to sell my book through their official store. A percentage of the profits will go towards helping the hounds in their care.
Here's a link: https://greyhoundtruststore.com/collections/all/richard-skipworth

I've also produced a range of Christmas cards for the Greyhound Trust again this year, and they asked me to help in promoting them - see link above. According to their page, overseas shipping is available, details on this link. https://greyhoundtruststore.com/pages/about-us

The calendar is available to buy on ebay but beware, postage is expensive.

Galga Pipi with a deep cut in her neck!

And another sweet brindle dog with Fundacion Benjamin Mehnert

'We have just welcomed Pipi, this beautiful little dog with sweet big eyes that tell us a sad story for now, we hope they will soon be able to tell us a very different story. Pipi arrived with a cut in her neck, which seems to indicate that she has been tied for a long time. We are going to heal the wound but we hope to heal another deeper wound, being a battered dog. We would like you to find a home soon. Would you give her that opportunity? Thank you'

If you want to help us financially:

Continue reading "Galga Pipi with a deep cut in her neck!" »

Can you help Galgo Ghuy with his dietry control? 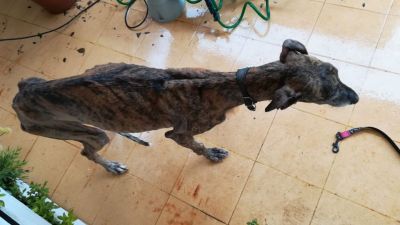 Ghuy returns to Fundacion Benjamin Mehnert shelter after 2 years sharing home life with his family. Due to the incompatibility of schedules and the pancreatic insufficiency that Ghuy suffers, his family could not attend Ghuy's care. We are sorry that this boy has to be with us after living with a family, the change could be very hard for him.

Ghuy needs a treatment to be able to absorb the nutrients of the food and diet control, nothing out of the ordinary. Would you give Ghuy a home? We hope someone could! Thank you all.

Continue reading "Can you help Galgo Ghuy with his dietry control?" »

In Memory of Midnight Terror, an Australian greyhound in Macau, China 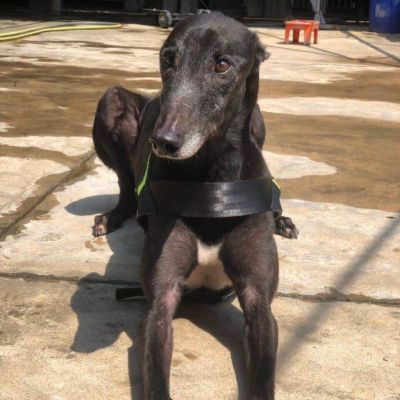 In the past I have reported on the Australian Greyhound breeders and trainers sending their unwanted hounds to China. This they have vehemently denied doing! Here's proof that they did, although this story does have a sort of happy ending.

From Albano Martins in Macau

I had been the day before in the Kennel to see his health situation and i found there Mr. Leung Chi Keung, his future owner, taking care of him! He has been a constant volunteer taking care of Midnight Terror from the first beginning in Canidrome! This is a good example of a responsible adopter!

On 15 November at 3:00 pm, Midnight Terror was cremated in Coloane Municipal Kennel and Mr.Leung will keep his ashes paid already by him!

Many reasons to adopt a galgo!

Many reasons to adopt a galgo!

Grey2K USA have won the battle to have 11 greyhound racing stadiums in the state of Florida to close within the next 2 years. You can read the story of their battle on this link.

Jerome Guillot is a friend from some years ago when we travelled as members of the L'Europe des Levriers team into Spain to bring back galgos and podencos to France for homing.

Jerome is the founder of the association CREL and was also one of the original organisers of the Strasboug march to publicise the plight of the galgos and podencos. Here's the latest news from him.

'I am jérôme guillot, founder of the CREL association for the protection of galgos and podencos in July 2009 and sponsored by MICHÈLE STRIFFLER MEP 2009-2014. At our last general assembly, all members voted for the CREL to become a federation .

It is now done, an avocate specializing in foundations has drafted the statutes of the Federation. The aim is to bring together all the European Greyhound/Galgo Protection Associations, initially, to put pressure on MEPs and governments. The Union will make strength, we must unite to fight against the abuse inflicted on greyhound and podencos in Spain, Ireland and elsewhere.

We invite associations to become members of the federation...Already 23 associations have joined - 17 French, 5 Spanish and 1 SLOVENIAN

Find out, visit the website, join the Crel Federation. We are at your disposal.

Beryl Brennan on 10 November 2018 in Campaign, In the media, Regional news | Permalink | Comments (0)