Rosario - a tale of a galgo rescued from the wild 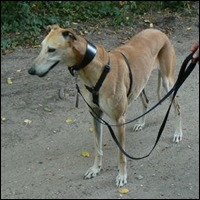 The capture of Rosario in Niort lasted only 15 minutes at the most!

After five and a half months of following and tracing her without being able to catch her, we needed to go carefully. It necessitated calling upon a professional of the SACPA (Societe Protection des Animaux) at Poitiers to come to our aid.

The hypodermic rifle needed to be filled for a dog of 30kg. Sebastien spent several different times in front of Rosario to get her used to seeing him. He then shot the tranquiliser arrow into her thigh. Rosario was surprised by the impact.

She ran. She crossed the boulevard Atlantic, at a pedestrian crossing, without looking if there was traffic coming.

Galgos - why do we love them? Unconditional Love

Why we love a galgo. This video shows some of the things which happen to them at the end of the hunting season at the end of January.

Don't switch off. Don't be too afraid of watching it, it is not too horrific, The pictures say a lot to explain the origins of the galgo, and follows the story through. And it shows just how much love these fantastic dogs can give, even though they might suffer so much hardship.

Please watch, and pass the word on, about the plight of the Galgos

Karmel had her biopsy samples taken by the vet yesterday; one from her nose, 2 from her body and 2 from 2 different feet. The vet also took a sample of the pus from one of the hundreds of lumps now covering the whole of Karmel's body. The samples were sent to the lab in the midday post yesterday, marked urgent. My vet will telephone the lab on Monday to speak to them about the samples, and she is hoping to have the results of the biopsy by Thursday, or even Wednesday.

In the meantime, Karmel is back on anti-inflammatory and antibiotic medication in large doses. My vet is worried that Karmel's condition is worsening quite rapidly now and, although this medication seems to control it, long-term damage could be caused to Karmel's organs if continued over a long period of time.

My poor galga, she does not deserve to suffer like this.

Fostering a Greyhound - something to make you smile

Thanks to Pat Getz of Greyhound Protection League for sending this one.

FOSTERING A GREYHOUND – ONE WOMAN’S EXPERIENCE

When you’re a seasoned veteran and fostered as many greyhounds as I have, it’s easy to make mistakes. So, after conducting much research, I decided to compile a list of common pitfalls foster Mom’s and Dad’s make, so you’ll know what to avoid should you decide to make the leap into the world of fostering.

1) Do not get laid off from your job 2 days after you pick up your foster. This only leads to bonding, which we know is bad; and eventual ownership. Try to impress upon your company that letting you go will lead to your submitting an unemployment claim for the animal, in turn costing them money.

Continue reading "Fostering a Greyhound - something to make you smile" »

Free Spirit - Rosario the Survivor has finally been caught I don't have a lot of details yet, but Rosario has finally been caught.

She was an abandoned galga in Spain, it took the Spanish volunteers several months to catch her. She was then vaccinated, blood tested, spayed and brought out of Spain into France in February 2008. Only a couple of hours after arriving at her foster home, she escaped.

Her foster family have searched and tracked her, tried to catch her, to no avail. Her foster mum lost weight with the stress and worry, not sleeping at night, waiting for a call that Rosario had been sighted.

Today's bulletin on Karmel - not too good. Click on link to read on.

Skydiving to Celebrate a Milestone! 20 of the happiest years of my life were spent in Suffolk. It's a lovely friendly county, lovely English countryside. Quaint pubs offering Ploughman's Lunch or Carveries. Nothing quite to match that where I now live in France!

But you can't take away the memories. Old Buckenham is one Suffolk village I remember well. Annie Boddey lives there now. And she's marking a milestone in her life. She's skydiving to celebrate her 50th birthday! AND even better, she's doing it to raise funds for greyhounds.

Karmel continues to cope without any medication, heading for her biopsy on Friday. She is brighter than she was last weekend, when on anti-inflammatories - but............things are getting worse!

A Kick in the Pants for the Galguerros It's encouraging to find some of the French associations involved in galgo rescue and campaigning now working together. After all, they are all working towards the same goal, to improve the life of the galgos and podencos in Spain.

Continue reading "A Kick in the Pants for the Galguerros" »